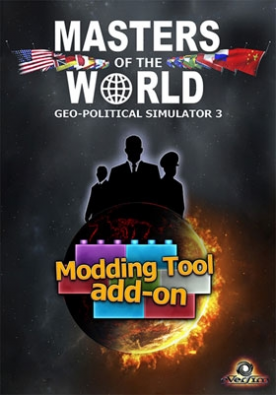 NOTICE: Requires the base game Masters of the World - Geo-Political Simulator 3 in order to play. ABOUT THE GAME “Modding Tool” add-on to Masters of the World With the Masters of the World modding tool, create your own geopolitical scenarios and share them with other players ! IMPORTANT : This upgrade only runs for owners of a valid and activated activation code of Masters of … the World. The modding tool add-on lets players create and play contexts and scenarios (mods), as well as share them with other users. Since its release, more than 60 mods have already been shared and downloaded using the tool. KEY FEATURES The modding add-on lets you : modify country data (economic, political, demographic, fiscal...) change international relations between countries (diplomatic alignment, military alliances...) transform world geography (merging countries, making regions independent, putting a new city on the map...) create new missions and scenarios that are highly developed and detailed (triggering protests, wars, disasters, political scandals, assassinations, national elections, character demands... with theoption of defining several conditions for triggering these events, and editing game text...) remake history by creating scenarios starting in the past or the future, from year 1900 enrich the scenarios with new character faces and names, new logos and group names with the customization kit that can be used with the modding tool easily share your creations (host and download from our website, directly send mods from the game...) New features (compared to the Rulers of Nations modding tool) adjust game settings: level of difficulty, disasters, warmongering, terrorism, and unrest create multi-country playable mods adjust the level of destruction of cities and military bases create new organization and modify existing ones remove railroad networks or pipelines from the map modify new laws: physician-assisted suicide, abortion, prostitution, marijuana... modify the different income tax brackets adjust the level of nationalization/privatization for industries configure commando units new scenario: “USA 2026” Some examples: USA 2026 In 2026, after a world war that devastated and contaminated the entire northern hemisphere, the player takes on the role of American president Jack Ohama, whose goal is to lead his country out of chaos and re-annex her lost territories. In this scenario, the modder has destroyed cities and railroad networks and created various epidemics in the territories affected by the war. The scenario itself has about 120 events and 50 texts, with numerous scripted twists and turns occurring along the way based on the player’s actions. Democratic spirit In this scenario, the player plays the head of state of a country affected by the Arab Spring. The objective is to shift to democracy before the people get rid of him. The countries you can play: Syria, Yemen, Bahrain, Iran, Saudi Arabia, Jordan, China, Cuba, North Korea, Oman, Mauritania, Sudan, Kuwait. With the Event Planner in this scenario (see the below screen capture), the modder can create different kinds trouble (demonstrations, riots...). With the Event Planner, you can choose the instigator of, the motive for, the seriousness of, the location of, and the conditions for triggering the event. These conditions can be a function of the specific timing (e.g. on such a date, a demonstration starts), of the value of one or several variables (e.g.: the dictatorship in the country is too strong), or other events that are triggered in the scenario (e.g.: a warning has been sent to the player). Text specific to the scenario, from newspaper articles to character requests, have been written and scripted by the modder. The modder selects the authors. The clash of civilizations In 2015, Huntington's theory becomes a reality. The nations with the same values have been grouped into eight main civilization blocs: Western, Islamic, Confucian, Latin-American, African, Hindu, Slavic Orthodox, and Japanese. The player must choose sides and face up to this new world order. In this scenario, the modder has grouped several countries together to form one single one. The modder also modified the diplomatic alignments among the 8 countries that have been formed in this way. SYSTEM REQUIREMENTS Windows 8 / 7 / VISTA / XP 2 Ghz Processor 4 GB RAM 2 Gb free disk space Graphics card DirectX 9 compatible: 256 Mb RAM Sound card DirectX 9 compatible © Copyrights by Eversim – all rights reserved

Other game releases by Eversim